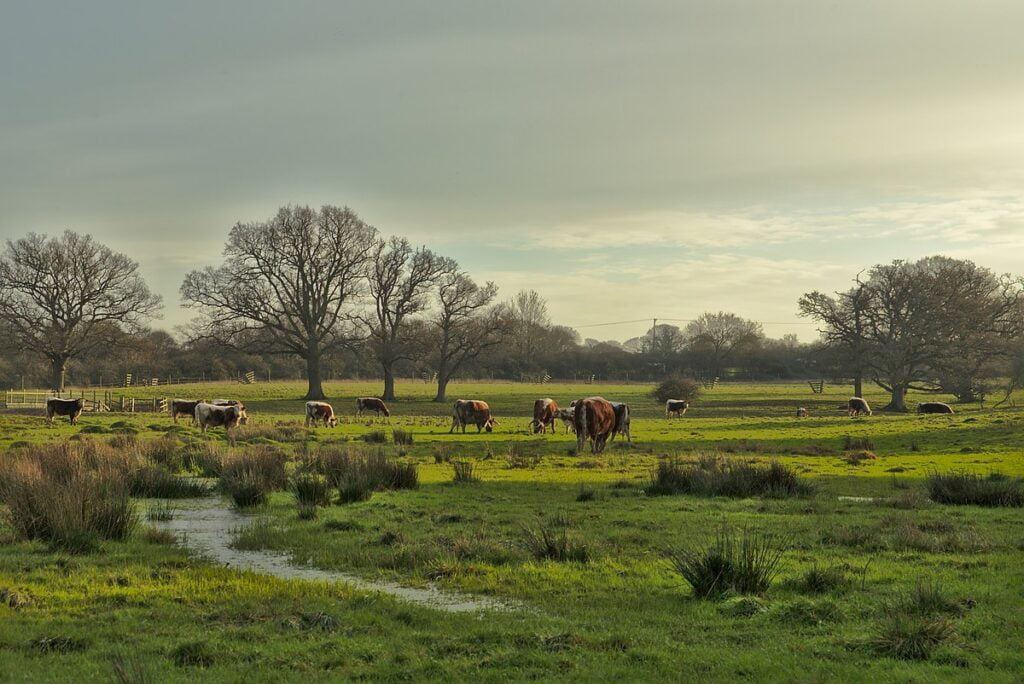 Some of you will have read about, and perhaps visited, the Knepp estate in Sussex, famous for its rewilding.  Wilding Knepp is 1000 acres of what used to be dairy farm, now managed in a way which allows nature to take its course. Long-horn cattle, Exmoor ponies and deer, are used as proxies for the large herbivores which used to roam Europe, and Tamworth pigs represent wild boar, all stopping the land being covered entirely in forest. This has been amazingly successful in restoring nature and specific species, such as nightingales and turtle doves, to the area. A few weeks before I went, a butterfly expert had spotted a Large Tortoiseshell, “presumed extinct” in Britain. 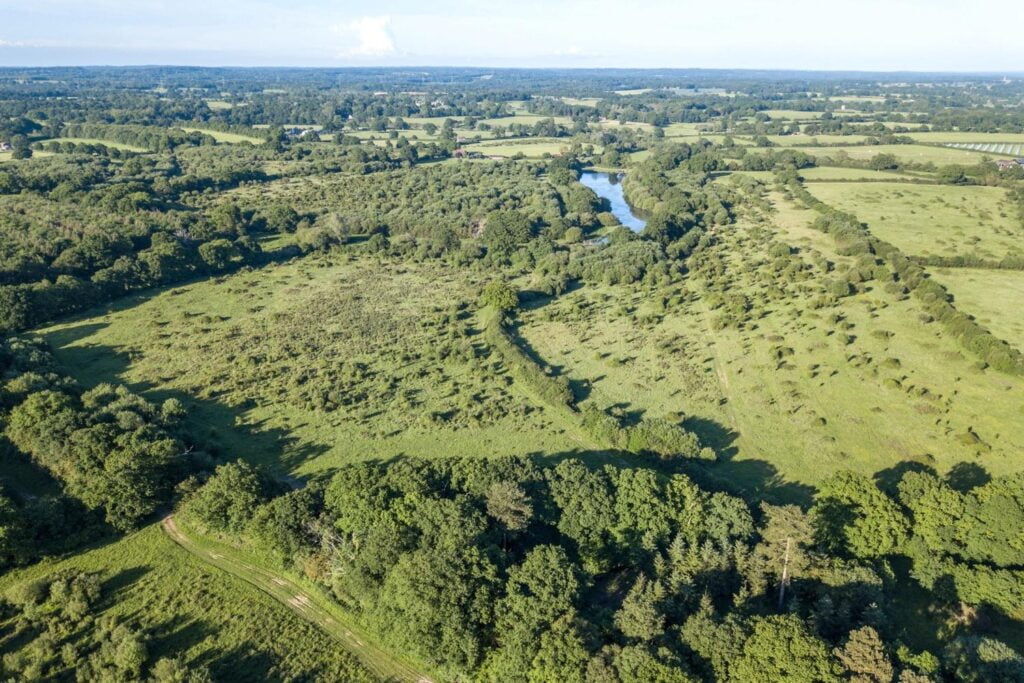 I was part of a group on a walking “safari” around Knepp Wildland, followed by a session with the owner, Charlie Burrell. The Wildland was not as I expected, less scrubby-looking but nothing like the manicured landscape of fields and hedgerows associated with the English countryside.

The first things we saw was a stork on its nest at the top of a large oak tree. Further off, about a dozen storks wheeled around in the sky – something you’d expect to see in Eastern Europe, not in Sussex. Injured storks from Poland were brought to Knepp (unlike other rare species, which appeared naturally) and are now breeding for the first time in Britain for about 600 years.

The Wildland has some big old oaks and ash trees, but much of it is dense rows of hedgerow trees left to themselves, grazed neatly for their first few feet, with higher branches overarching the more open areas. What were fields are now turning partly to scrub (good for wildlife, unpopular with people who want to control the landscape). When I went the open areas looked full of yellow flowers, ragwort and fleabane. (Ragwort is poisonous to grazing animals, but Knepp say that animals only eat it if there’s nothing better, and usually the plants at Knepp are all consumed by Cinnabar moths, although this hadn’t happened this year.)  When you looked more closely, you could see many different grasses and other flowers, as well as invertebrates. Meanwhile our guide helped identify the birds we could hear in the scrub and trees.

Clumps of sallow, other young trees, hedgerow plants and brambles grow in the clearings. How to stop brambles taking over is a frequent question, and here the animals browse the young shoots and the brambles shelter saplings as well as animals. A young oak or willow grew out of the centre of some of the bramble clumps, and eventually, as the trees grow, they shade out the brambles.

They say that the Knepp landscape is like English savannah, but I don’t entirely agree. From a viewing platform it looks much greener, with less open grassland, the trees and shrubs stretching away and the open areas almost obscured. I saw three fallow deer from the platform, their big, flattened antlers sticking up above the vegetation. However, to allow nature to take her course, there aren’t many of the large animals for the acreage, and they aren’t easy to spot. 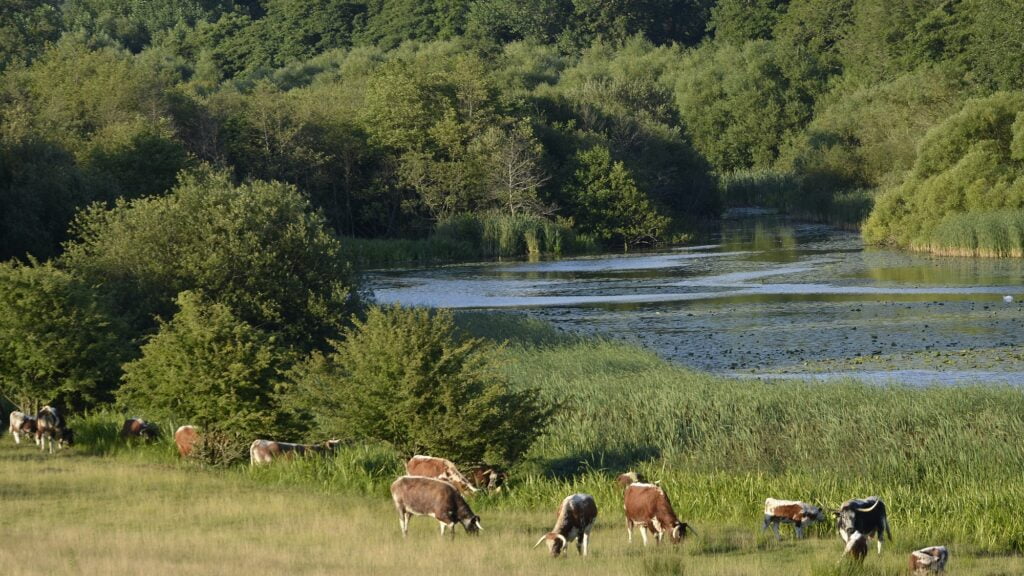 I couldn’t have had a more interesting day, but there are questions, some of them not, I felt, fully answered after an hour or so’s discussion with Charlie Burrell. Knepp is a beacon project, but how replicable is it? We were told there are actions many landowners and farmers can, and I think do, take: let the hedgerows grow out, cluster together to form wildlife corridors, plough less, leave wide field margins.  I felt this didn’t say much I hadn’t heard already.

Perhaps more innovative is the idea of combining biodiversity credits with carbon credits and selling them to companies (although the idea of putting a price on nature is frowned upon by some conservationists). This would prevent, for example, the planting of sitka spruce plantations to offset carbon emissions, but which do nothing for biodiversity and are not sustainable in the long-term because they are cut down and release carbon. Charlie Burrell and others have bought 1500 acres in Lincolnshire to use for carbon + biodiversity credits. Next to this is a large acreage of lettuces (which seems to me a strange way to use scarce land – lettuce is not particularly nutritious and has few calories, and salad greens grow ok even in Hope Valley). The rich souls of Lincolnshire are becoming seriously depleted, so it makes sense to rewild in some cases. However, not much is known about the carbon in soil, Charlie Burrell said, and four universities are looking at this across the Knepp estate.

Another question is, how can re-wilding work with food security? One answer is that you rewild the margins, as above. Working with neighbouring farms can create effective wildlife corridors, and landowners have applied for funding for a corridor from Knepp down to the south coast, see https://www.theguardian.com/environment/2022/jul/22/sussex-farmers-plan-to-create-wildlife-rich-green-corridor-to-the-sea . Eating less meat would also help: a 15% drop in meat consumption would eradicate the UK’s need to import grain from Russia and Ukraine.

And there’s the finances. Knepp’s largest income stream, about 40%, is tourism, that is, tours of the estate and camping. It also receives income from meat sales, standard government grants and rents. Some of its initiatives, such as a new regenerative farm, are loss-making. A member of the group who has a small regenerative livestock farm in Devon makes more per hectare than either a conventional livestock farm or Knepp, because his input costs are minimal and he sells direct to the public. However, for a few years until he was established, he made a loss.

Implications for farmers in Hope Valley

I’m not sure how the Knepp model could translate into a living for farmers who can’t raise money from visitors but don’t want to farm intensively, and can’t cover the few year’s gap before they make a profit from regenerative farming. However, Charlie Burrell said that all farmers are on a cliff-edge due to changes in subsidies and uncertainty surrounding this, and will need to farm differently in the near future.

If you want to know more, you could read Wilding by Isabella Tree, google Knepp and Rewilding Britain, or pay a visit yourself.

PrevPreviousCement and progress on carbon capture