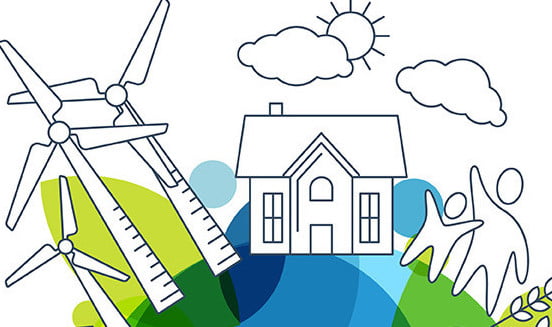 HVCA’s Energy Group has just published its study of the feasibility of installing renewables in Hope Valley. The Group is also involved in a related programme of work on energy efficiency and retrofitting homes.

We set ourselves 3 simple questions.

1.  How much electricity will we need in Hope Valley as we electrify our homes and vehicles?

2.  What mix of renewables would meet this demand?

3.  What is the range of public opinion to different large scale renewables.

In addition, the study threw up two further issues which we were able to investigate and answer:

4.  What else will be needed, like storage, to cope with fluctuations in supply and demand?

5.  What barriers will need to be overcome to make any of this possible?

The UK Government has pledged to more than halve our carbon emissions by 2030 and to get to net zero by 2050. The strategy for achieving this includes electrifying our homes and vehicles. Our study suggests that the annual base domestic electricity demand in Hope Valley will rise from 23 to 60 GWh by 2040, which means we will need two to three times as much electricity.

One mix of renewables that would generate this amount of electricity would be solar on 1 in 3 residential roofs, 2 5MW solar arrays and 3 large wind turbines. We would also need considerable storage capacity to cope with peaks and troughs of demand and supply.

National policy prohibits large scale renewables in national parks. To gauge public opinion and reflect the view of our supporters we conducted a survey in January. 675 people responded.  400 live in Hope Valley, 100 elsewhere in the Peak and the rest are visitors from further afield.  Half are members of a climate group or are HVCA supporters and half are neither. The scope of the survey also covered energy savings, retrofitting and electric vehicles.

We need the Local Electricity Bill to become law to make community power viable. The National Planning Policy Framework says that permission should be refused for major development in national parks other than in exceptional circumstances, and where it can be demonstrated that the development is in the public interest. Northern and Western Power, our two distribution network operators, change millions to connect large renewables into the grid and don’t guarantee the supply contracts. HVCA will be advocating on these issues.  We will also be working with the Peak Park to define the criteria to be used in deciding which of the many areas of the Park would be inappropriate and where renewables might be permitted.

On 9 May 2022 we wrote to Sarah Dines, MP for Derbyshire Dales, and to Robert Largan, MP for High Peak, asking them to support strengthening of the Government’s Energy Security Strategy, and highlighting the importance of renewables and community energy.  We have presented our energy report to 12 local Parish Councils and emailed local District, Borough and County Councillors and those on relevant climate or environmental committees and asked them all to write in support of our letters to MPs.

1.    Present the key findings of our report at the next meeting of the Peak Park Climate Forum at the end of July and begin conversations with the PDNPA about renewables.

2.    Arrange meetings with senior officers in other national parks that are beginning to address how meeting the Government’s climate action targets can be accommodated in national parks and Areas of Outstanding Beauty.

3.    Continue to work closely with Hope Valley Renewables, the Community Benefit Society founded by residents of Hope and Bradwell.

4.    Collaborate with other climate groups both locally and nationally to promote the careful and sensitive development of renewables.

7.    Continue to advocate in favour of the Local Electricity Bill.