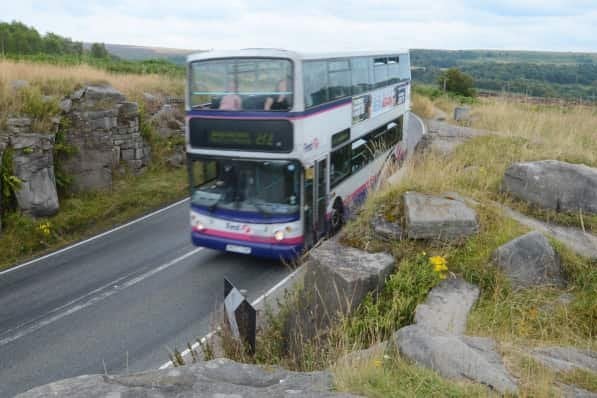 I live I Edale but as an advocate of public transport, I thought I’d try a local bus. The adventure started on the Internet, where I googled bus, Sheffield to Hope, and found a First Bus at 16.36.

I cycled to Hope, left my bike with a friend and took the train to Sheffield. Having done my errands, I arrived at the bus stop on The Moor in good time. (One thing about using public transport is that you look at the time a lot.)  There were several people waiting there, and buses seemed to arrive frequently. The Castleton bus arrived on time.

I climbed the stairs to the prime spot, top left, at the front, and remembered the excitement of finding this seat empty during my childhood in London. That part of bus culture seemed to have died, at least around Sheffield. The only other person on the top deck was a small dark woman holding a cake who came and sat just behind me. She talked loudly into her phone in almost impenetrable English, saying she’d be there in ten minutes, to deliver the cake, I assumed.

Sheffield looked rather drab from my vantage point, the streets crowded with cars, the houses scruffy – more so, I thought, than from ground level, as if people painted the facades of their houses and shops but didn’t really bother with the roofs, and why would you? As the bus wound up out of Sheffield I saw the tradition and change of rural England, in a way you wouldn’t with the tunnel-vision of car travel. There was a classic scene of cricket, white on much-mown green. In contrast, a field left to itself was golden with late summer grass, dotted with vigorous young trees of elder and willow and patches of thistle. A plantation of young spruce and trees in tree guards planted in neat rows – non-native conifers and lots of plastic – looked an unlikely method of helping nature, but nearby was  a hay field mown with wide margins for plants to grow freely. Small, tough traditional cattle grazed among scrub and heather. The heather was in its full August glory, pale purple and healthy-looking. The cars seemed to disappear as the bus trundled on; there was too much else of interest to look at and wonder about.

The bus slowed on the corner below Surprise View, and I caught my breath, feeling perched precariously on the edge of a precipice high above the valley.  The view down to the green woods and fields far below, and on to the grey and purple hills, was spectacular. It felt really like an adventure, much more dramatic than from a car or the safe feel of boots on the ground

We wound down into Hathersage and the adventure continued, slightly wobbly high above the narrow road, with new views of the familiar, over the fence to Hathersage Hall, over walls to the fields.

The 272 Sheffield-Castleton bus, however, had done all I’d hoped for and deposited me in Hope on time to pick up my bike after my mini-adventure.

PrevPreviousUse the Bus 11-24 April
NextA Doughnut in the ParkNext