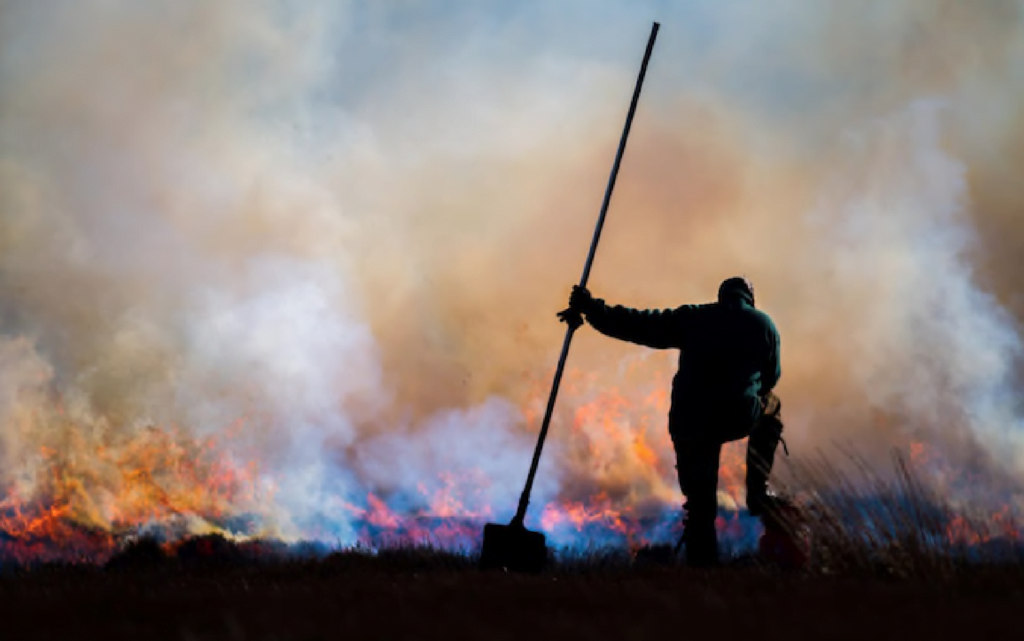 Wildfires pose a significant risk to blanket bog habitats and, whether caused deliberately or by carelessness, they seriously threaten fragile moorland habitats. Wildfires in peat can result in severe carbon loss and damage to water supplies, and fighting wildfires is difficult and costly. 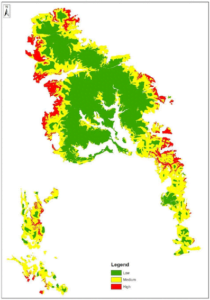 Fires can extend for several miles, burning deep into the peat. They decimate plant and animal life and can result in sterilisation of the peat, so that regrowth is not possible without intervention.  Fires can have a disastrous effect on wildlife when birds are nesting and sheep lambing. They are difficult and distressing to deal with and pose a huge financial burden to the fire services and land managers. They also release large amounts of carbon dioxide. (Over 3000 tC was released by a fire on the Roaches on 10 August 2018.) [ii]

Recreation is thought to be the major source of ignition. [iii] However, although wildfires have been logged by Peak Park rangers since 1974 and by the Fire and Rescue Services and others since 2007, it is still not clear what are the initial causes of ignition of many fires other than to say they are induced by people. Of the 423 records of fires in the MoorLIFE2020 database only 48 record the cause which means that the cause of 88% of fires is unknown or unrecorded. [iv]

When do wildfires happen

Wildfires occur during the drier months, especially April-May. To date, most wildlfires have occurred in spring when the dead grass and woody heather ignite easily. In future, as temperatures increase, summer wildfires will become more catastrophic.

Where do they occur most frequently

Fire risk increases on bare peat near main footpaths. [v]  Most fires occur on bare peat, and moorland grass areas, with fewer fires on wet bog communities. If climate change, or rotational burning, encourages a transition from wet bog to dry bog and grassland, fire risk will increase. There were significantly more reported fires on Access Land than on non-Access Land; most fires occurring within 300m of roads and eroded paths, 750m of trampled paths, and within 2km of the Pennine Way. [vi] 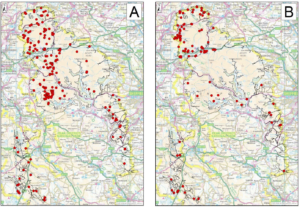 Up until 2020 there is no apparent increase in the incidence of recorded wildfires. 2010 was a particularly bad year. 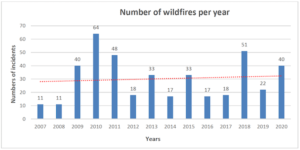 The incidence of wildfires is likely to increase with climate change. Wildfires risk in UK increases in hot, dry weather conditions, especially drought. The main impact of climate change will be to make summers more hazardous. The Peak District is expected to experience warmer, wetter winters and hotter, drier summers, with the risk of wildfire occurrence rising disproportionately with temperature. Modelling by a team at Manchester University and Manchester Metropolitan University predicted little change in wildfire incidence before 2070. [vii] Their models assumed no change in annual visitor numbers, while visitor numbers have increased dramatically since COVID. It is, of course, uncertain that this increase will continue.

Measures to manage moorland to reduce fire risk include rewetting, greater diversity of vegetation, publicity campaigns and signage, controlled burning, and grazing or mowing to remove fuel. Controlled burning can be used to create 10m firebreaks and to reduce fuel load. It is, however, highly controversial, and is now prohibited by law on deep peat (ie ≥ 40cm) and some landowners are trialing mowing as a preferred method of reducing fuel.

The key thing that all agree about is that a wet, well-functioning blanket bog is far less likely to burn.  It is also unlikely to release stored carbon.  Moors for the Future, the National Trust, the RSPB and moor owners have been working hard to restore blanket bogs.

To quote the IUCN Position Statement (2021), “The most effective long-term sustainable solution for addressing wildfire risk on peatlands is to return the sites to fully functioning bog habitat by removing those factors that can cause degradation, such as drainage, unsustainable livestock management and burning regimes. Re-wetting and restoring will naturally remove the higher fuel load from degraded peatland vegetation.”

Natural England provide a recent example of the benefit of rewetting over controlled burning – the Saddleworth 2018 wildfire, which started on a driven grouse moor and was eventually stopped by the rewetted areas of RSPB Dovestone.[viii] 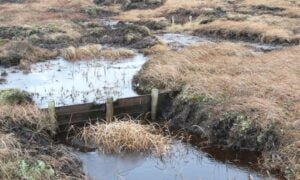 There is widespread opposition to controlled burning on grouse shooting estates. [x] Recent research has, however, suggested that controlled burning may not be all bad and prescribed burning at regular intervals can increase Sphagnum cover by reducing heather cover and canopy vegetation biomass. [xi] [xii]

However, many conservationists believe that the negative impacts of controlled burning outweigh the benefits. A five-year study by Leeds University funded by the Natural Environment Research Council concluded that: [xiii]

The International Union for Conservation of Nature (IUCN) updated their position statement on moorland burning this year.[xiv] They argue that

However, a critical review of the IUCN position statement states “while we strongly agree with several of the statements made within this position statement, it also contains a series of unverified assertions and misleading arguments that seemingly serve to simplify the narrative and paint prescribed burning as a wholly damaging peatland management tool”.

Clearly this is a highly controversial issue plagued by vested interested and misinformation. Whether or not controlled burning is really ecologically sustainable requires further study. [xv]

Native woodlands and peatlands are two of our largest natural climate regulating ecosystems. They are both of high biodiversity importance and are a priority for conservation and restoration in the UK. Both have been subject to centuries of loss and damage and both need protection and restoration.   New forest planting on peatland is not supported, however, and growing trees on peatland is not the most sustainable or cost-effective option for tackling climate change.

While planting of commercial forestry dominated by non-native species would be opposed by many on conservation and climate change grounds, encouraging native woodland regeneration (which may include planting) is often supported. It may not be appropriate on deep peat, but it would be in other moorland areas, including clough planting and other drier areas. Broadleaved woodland is generally considered low fire risk and an ideal combination would be wooded cloughs and hillsides, with wet bog on the tops.

What can HVCA volunteers do?

We can volunteer with moorland restoration schemes and replanting. Contact David Hughes, coordinator of the Land Group if you want to get involved and help. hughesonline@btinternet.com

We can also help with education, explaining the consequences of careless behaviour, and we can lobby and persuade, for example to prohibit the sale of portable BBQ.

I would like to acknowledge the critical help I received in improving this blog and in ensuring the views expressed were balanced and accurate.

[i] Dixon, S.G. and Chandler, D. (2019). Producing a risk of sustained ignition map for the Peak District National Park Moors for the Future Report, Edale.

[ii] Titterton, P., Crouch, T., Pilkington, M., (2019). A case study into the estimated amount of carbon released as a result of the wildfire that occurred on the Roaches in August 2018. Moors for the Future Partnership, Edale.

[iv] Titterton P (2021) MoorLIFE 2020: D4 – Final Wildfire Database Report: A guide to the methodology used in creation of the wildfire database and an analysis of trends associated with key variables. https://www.moorsforthefuture.org.uk/__data/assets/pdf_file/0028/265690/MoorLIFE-2020-Wildfire-Database-Report-2021.pdf