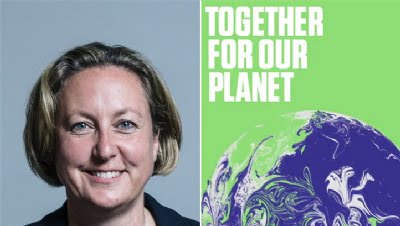 John de Carteret wrote to Robert Largen, MP for High Peak, with 7 key questions about Government policy to tackle climate change. Robert passed his questions to Anne-Marie Trevelyan, Minister of State for Business, Energy and Clean Growth and International Champion on Adaptation and Resilience for the COP26.

I was glad to see your support for wind energy, tackling illegal deforestation and promoting reforestation, restoring 30% of Britain to nature by 2030 to protect wildlife, restoring our peat bogs and the new Government target to cut UK emissions by 78% by 2035, which was displayed in your office window in Whaley Bridge.

From our previous contacts and correspondence, I value your support for Community renewable energy, and the decarbonisation, integration and upgrading of our Public Transport systems.

I appreciate that the Government now realises that action on the Climate and Biodiversity crises is urgently necessary and has increasing public and business support. The Prime Minister has started to talk about needing to be a Climate leader and this is essential, particularly as we are hosting COP26 in the autumn and we will be taking part in the Biodiversity Summit soon. Both of these are crucial because time is running out for halting biodiversity loss and preventing runaway climate heating. This combination is an existential crisis for human civilization and for the majority of the species with whom we share the planet. The quicker we take bold action the more effective and less costly it will be, and although it will be difficult, if we can co operate internationally, the prospect of a planet on which all people and nature can thrive is just still possible.

I am increasingly alarmed that many of the Government’s policies, as we face building back after the pandemic, are going strongly in the wrong direction, in spite of its Green aspirations. There also appears to be little overarching co ordination between different Ministries in prioritising the effects on the environment and Green House gases when all policies across Government are being considered.

Here are some recent policies which illustrate that many within Government have not yet taken on board the urgency of the situation or the once in a lifetime opportunity, which recovery from the pandemic presents, to reset the economy and our political systems, so that they work for all people and nature. Green targets are important but only if the necessary planning, finance and coordination result in effective policies:

The withdrawal of the Green Homes Grant with no replacement. Major investment in Green Construction and Renovation of the whole country’s poorly insulated and drafty housing stock, is one of the most cost effective projects the Government can start now. For a successful scheme,training, education and recruitment in Green Construction, upgrading of the building regulations, changing the tax structure to encourage Eco-renovation rather than new build is necessary. With proper investment from Government this has the potential of creating a large number of low carbon, skilled jobs to make up for those we have lost in the pandemic and to replace jobs which need to disappear in the fossil fuel based industries.

Recent issuing of exploration licenses for oil and gas in the North Sea. This is completely against any serious attempt to decarbonsise. We know that we will need to leave much of the fossil fuel reserves, already discovered, in the ground if we are serious about preventing runaway climate change. Allowing further new exploration completely incompatible with our current Paris commitments and gives completely the wrong message internationally. We need to be investing immediately in the many new, skilled low carbon jobs which fossil fuel workers will need to be re trained in and contribute their skills to.

3. Incentives to encourage switch to EV’s

Reducing incentives for buying Electric vehicles. This is another own goal, just when the electric vehicle transition is taking off. Of course we need, at the same time as stimulating the transition to electricity to invest in a major upgrade in recycling the rare metals and minerals which are needed for electric batteries and the electronics industry, by making manufacturers regard their old products as their primary feed-stock. If this is not done now, we will be left with a huge increase in mining world wide and huge increases in ‘waste’ electronics, with all the detrimental effects on the environment this will mean. Investing in recycling and the circular economy is another huge source of green jobs as we recover from the pandemic.

Announcing a £27billion road building fund. There is so much evidence that building new roads just encourages more vehicles onto the roads and only results in very temporary reductions in congestion. It is essential that we reduce the number of vehicles on the road and develop frequent reliable low carbon public transport instead. This £27 billion should be used to fund the green infrastructure we desperately need, including public transport,active transport, upgrading of the electrical grid so that it will cope with decentralised, community owned renewable energy production.

Supporting further airport expansion and reducing Air passenger Duty for inland flights. Inland flying should be being made more expensive, not less and we cannot continue to expand air transport in the future. There is no prospect in the immediate future of ‘Green’ fuels in sufficient quantities to allow the sort of growth we have had until the pandemic stopped it. Most flying is done by a very small minority of the population. We need a frequent flyer tax.

Reducing Foreign Aid from 0.7 to 0.5% of GDP. This is having major, serious effects across the world and is such a bad message to poorer countries who, at this time more than ever, need help in combating the pandemic, tackling poverty and inequality and climate change. As far as I understand this decision has not even been debated and agreed by Parliament. It will work against our being able to get the international consensus, which is essential at COP26, and also in our status as a country that can be trusted as we seek new trade agreements.

Contemplating allowing a new coal mine in Cumbria. I was flabbergasted when the Secretary of State did not call for a Public Inquiry on this decision by Cumbria. Fortunately, because of the huge domestic and international outcry, we will have a Public Inquiry now, but this should never have got to this point. We need, very rapidly to invest in manufacturing and using Green Hydrogen in Steel manufacturing.

I have been working for a Green and healthy society for many years, and this opportunity when building back from the slump caused by the pandemic is the best in my lifetime, and probably our last chance of resetting the world economy on to a sustainable footing. It is a hopeful time if we get it right, but we have a dismal future if not.

Please will you write to the Ministers concerned with these specific policies and ask what they are intending to do to ensure that all policies are assessed with Climate Change and Biodiversity in mind, and what they are doing now to make sure that every policy is compatible, both with our ‘Green’ targets, and with fulfilling our legal responsibilities under the Climate Change Act and under the Paris Agreement.