Doughnuteconomics and the Climate and Ecological Emergency Bill 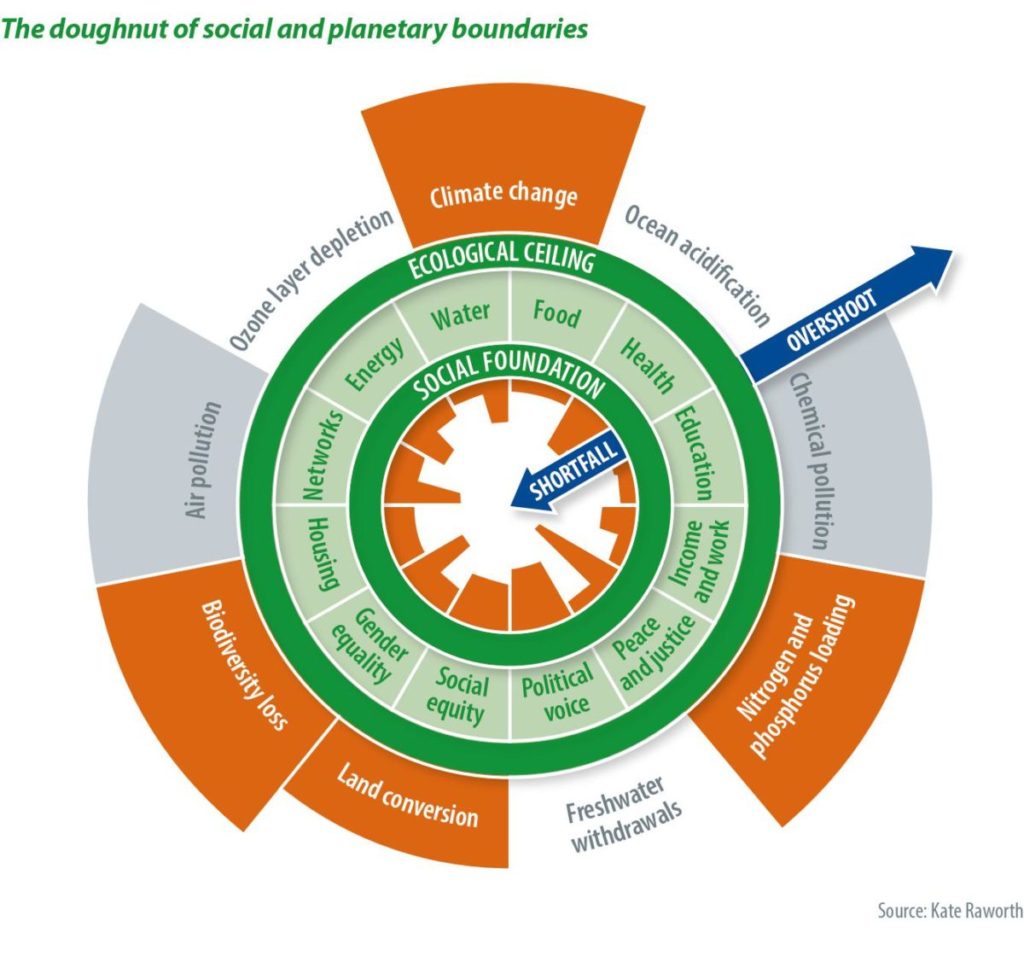 It is encouraging that the Government has committed itself to urgently electrifying our transport systems and increasing investment in wind and solar energy, though the actual investments promised are woefully inadequate to keep Global Heating below 2 degrees. Clearly we need to continue to emphasise the urgency of decarbonising our economy and ensuring that adequate investments are switched away from fossil fuels and into renewables and energy efficiency, and also keep on exposing Greenwash rhetoric which is not backed up by adequate action.

I am increasingly concerned about environmental campaigners talking about ‘Clean’ energy without apparently being sufficiently aware of the deep seated changes in the way our economy and socio-political systems function, which are simultaneously necessary to create a society which does not destroy its own life support; the healthy soils, unpolluted air and pure water which are essential for all life to thrive.

There are many examples of successful single issue campaigns which have produced policies with disastrous consequences because the systemic, unforeseen effects were not considered. Two examples we are living with today are the policies which financially encouraged wood and biomass as ‘carbon neutral’, and the encouragement of diesel engines because they have lower CO2 emissions. The results of these policies are, in the first case, power stations like Drax converting to imported wood pellets which are accelerating deforestation in the USA, and  in the second case an increase in dangerous Nitrous Oxide and particulate air pollution in our cities.

Solar panels, batteries and electric vehicles, when rolled out at the scale required, will massively increase demand for minerals like silicon, lithium, cobalt and copper. Electric motors and the wiring require a lot more copper than current vehicles. Lithium and Cobalt will be in huge demand for batteries. If this happens while our present economic system remains essentially the same, we will end up with more exploited miners, environmental devastation from expansion of mines, products designed for ease of manufacture and cheapness, rather than longevity and ease of recycling, mountains of defunct solar panels and battery ‘waste’ and a few corporations and executives who will be enriched, while the majority of workers involved will not benefit from the wealth created. At present, for example, Cobalt mined in the DRC using cheap child labour and environmental pollution from the mining processes is rife. In South America, where lithium salts are easily obtained, workers are exploited and environmental considerations are subordinated to making  profits for a few executives  and investors with negative benefits for local people.

As climate activists we need to see that working to  create an equitable society, ensuring that our soils, water and air are conserved and unpolluted and that all people and wildlife have fair access to these basic life support systems, are inextricable parts of  our urgent actions to decarbonise the economy. Our economic and political systems must change so that they operate within the reality that the economy is something we design and is just a subsystem of the planetary ecosystem. I would like to commend the Climate and Ecological Emergency Bill Campaign because it addresses these wider issues.

The Climate and Ecological Emergency Bill Alliance is aimed at upgrading our Climate Change Act so that it takes into account recent research and provides a legal framework for necessary action. It aims to ensure the UK plays its fair and proper role in limiting global heating to 1.5°C, and conserves the natural world by restoring essential ecosystems. A temporary, emergency Citizens’ Assembly is also proposed by the Bill, in order to assist the UK Government determine which policies to include in its emergency strategy to reduce emissions and protect nature. The Assembly will help MPs to take the necessary actions, and empower ordinary people to have a real say in a just transition to a zero-carbon society, enriched by a thriving natural world.  The bill has been drafted by Climate Scientists and experienced lawyers and promoted by some of the same people who were involved in the campaign which resulted in the Climate Change Act 2008. Currently around 88 MPs from 6 different Parties support the Bill. There is also an Early Day Motion associated with it.

To read more about the CEE Bill go to www.ceebill.uk

If you want to know more about exploitation and environmental destruction in electronics supply chains a good place to start is www.fairphone.com. To learn more about Ecological Economics two good starting points are doughnuteconomics.org and New Economics Foundation.