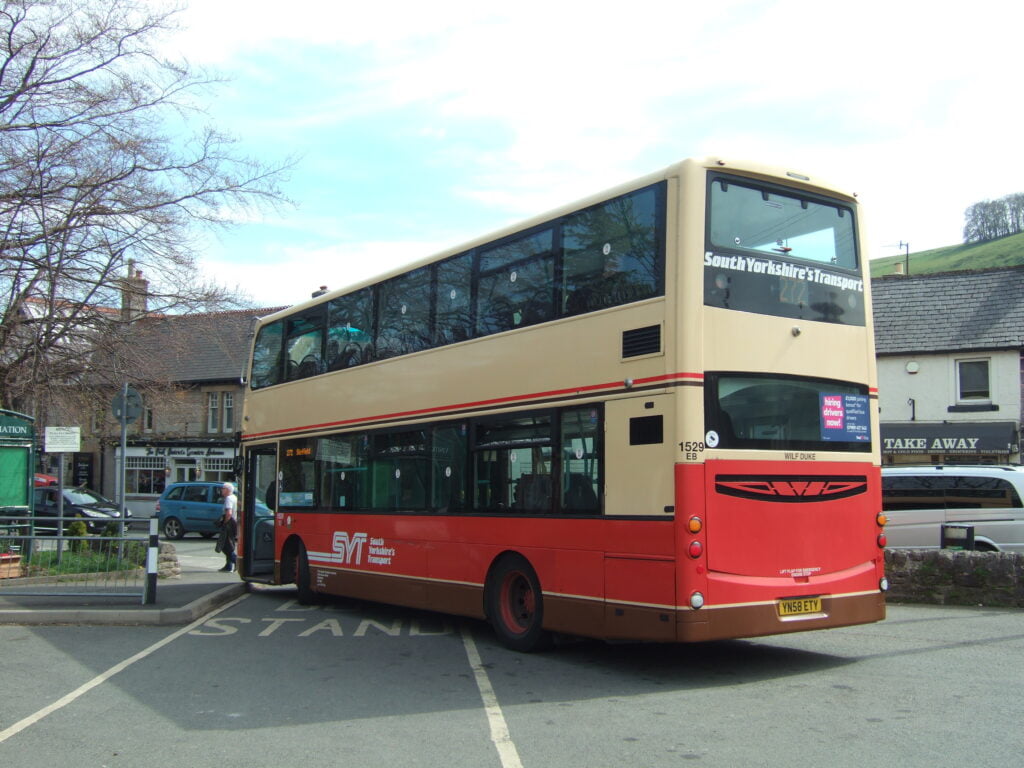 While I use my OAP bus pass in and around Derby a lot, my occasional visits to the Hope Valley have been by car or train.  Knowing about HVCA’s campaign, I thought it was time for a day out and to try the buses.

Where should I go?  Castleton seemed a safe destination.  But by a devious route.  After studying www.derbysbus.info, I found that changing in Tideswell involved a long wait, but Eyam seemed a possibility.

So, the Wednesday after Easter saw me boarding a Stagecoach single decker on the 65 in Sheffield Interchange after a train ride from Derby and a cup of coffee from the stall next to the stop.  I grabbed my favourite seat, the nearside one just up the step, where I can see over the head of those in the low floor section and out of the windscreen.  Two OAP couples joined me for a ride into the Peak District and another ten or so as we worked our way round The Moor and up Ecclesall Road, the friendly driver coping well with foreign students not sure where they were going.  I noticed that the road’s nature changes abruptly after Banner Cross, from urban to tree-lined suburban.  Soon we were on the moors, with wide but hazy views first to the south-east and then west, before the steep descent into Grindleford.  We arrived in Eyam smack on time.

Just time for a quick potter round in Eyam, where I noticed the Tea Rooms doing a roaring trade with families who had come by car.  Then it was on to a 257.  Good job it had a clear destination screen as it was painted red and green, not Hulleys’ blue and cream.  Only two other passengers, disappointing.  Retracing my steps to Grindleford, I wondered why no buses go to my namesake village.  Then through the woods above the river to Hathersage.  I got off by the Little John, at the only stop I used all day without a timetable.  Reassuringly to visitors, these were all up to date from 17th April.

Another brief potter and then another bus in unusual colours, though there was no mistaking a double decker on the 272, even if it was in 1970’s “South Yorkshire Transport” livery.  A bit late and fairly busy with the front seats upstairs taken but the views from a bit further back still better than at car level.  I spotted a field full of sheep with very small lambs.  Single lane with traffic lights for roadworks by the garden centre in Bamford and lorries and caravans on the narrow roads round Bradwell made us even later – I hope no one was in a hurry.

By now it was time for a sandwich.  Castleton has lots to offer, but I couldn’t find a proper picnic area – I did manage a convenient wall.  Lots of people about, the car park was full.  It would have cost £4 for the time I spent in the village.  After a walk round, and a more energetic visit a little way into Cave Dale, I had a cup of tea and then sat in the sun waiting for the bus back to Sheffield.

I expected this to be late and it was.  I did expect something bigger than a small Hulleys single decker, but it coped, although it got full in the outskirts of Sheffield.  It fitted better round the narrow streets in Bradwell and romped up the hill out of Hathersage until we got stuck behind a bicycle.  Back in my favourite seat, with the sun out and the air clearer, the views were even better than in the morning.  At 5.45 pm, Ecclesall Rd was a lot busier than it had been in the morning, but the bus lane was in operation and that makes a big difference.

All in all, an excellent day, helped by the weather.  All for the cost of an OAP Derbyshire Wayfarer.  I must come again, perhaps via Bakewell and the 173.

Use the bus, we’d said. So I used the bus, even though, like some of the people who commented on Twitter, I can’t really agree that we have great bus services in the Hope Valley.

I was going to Buxton, and as I live in Edale, this meant starting off on the train to New Mills Central, crossing New Mills to get the 199. There were other routes but this seemed the most reliable, what with landslips and roadworks.

From New Mills Station I trudged down the stairs to rocky, overgrown Torr Vale and past the bulk of Torr Vale Mill. It seemed almost empty except for a light on the office on the first floor and a sign said hopefully “IMRE retail and office space TO LET”. Humph, I thought, retail’s gone on line, everyone’s working from home now. Things change fast, and not only bus services. When I took the train to Manchester, thirty years ago, they were still producing sheets at Torr Vale Mill. You could see through the windows of one floor women lugging large bits of cloth around.

The bus stop was on the A6 and a puzzling extract from a timetable, hard to understand, seemed to be telling me that there was a bus in about twenty minutes. I resigned myself to a wait and  read my novel, trying to ignore the heavy lorries and car-driving commuters failing to use the bus. The bus duly arrived at 8.39.

The A6 is hardly picturesque, but as usual on public transport, there were things to notice. Bright jolly pictures on the fence of Furness Vale primary school contrasted with the murky weather and grey terraced houses. Forsythia and daffodils spilled over from gardens onto the road and I looked down onto the canal and speculated as t whether people were living on the barges there

Then into typical Derbyshire countryside – hills, sheep, stone walls, sad od ash trees – and through a pretty village called Tunstall Milton. I realised I have no idea where I was but I was enjoying the swift, slightly bumpy ride through the countryside and assumed I’d get to Buxton in time. There was none of the panic I feel getting lost in a car .

The bus returned to the A6 and beyond Chapel they were just setting up traffic lights. As the traffic slowed, I looked at the banks of Barmnoor Clough. It was covered in flowers – wood spurge, celandine, bluebells ready to flower later in the spring. If I’d been driving, I would have been worrying about the lights, not looking at flowers. In contrast, down in to Peak Dale, was the huge gash of the Cemex quarry. A DB sign reminded me that some of our railways, including apparently the one serving the quarry, are owned by the German State railway company….but that’s another story.

The bus arrived in Buxton on time, and I’d gained some local knowledge and had a mini-adventure through using it.

As for those comments on Twitter – they are evidence that we need to campaign even harder for good rural bus services going where people need them.