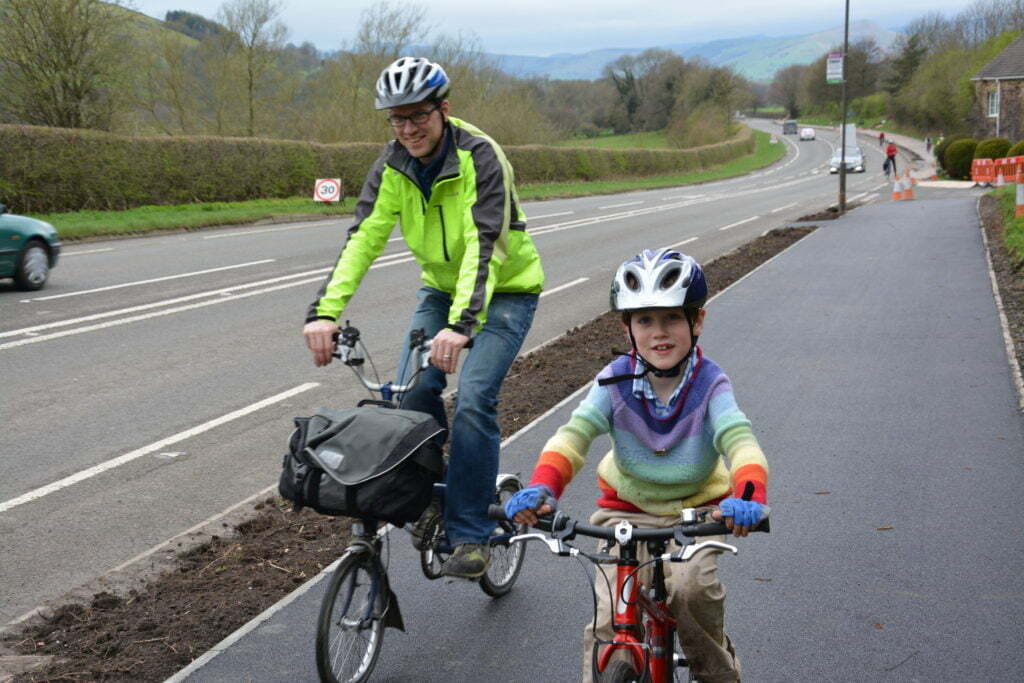 For this first blog, I’m going to take a quick visit to the Travel and Transport Group.   Next month will be all about food and farming, and then the following one about wildlifing and rewilding, and then the energy group after that.  So tune in as we go along as we’ll have a fine time catching up with what everyone is up to.

Meanwhile there is a survey going on as we speak to find out from visitors to the Peak what barriers they experience in using sustainable modes of travel.  It would be excellent if you could complete this survey and share it as widely as you can.  Deadline 31 July. Thank you!

One of the good things to come out of the pandemic is extra money to improve cycling and walking infrastructure round the country.  Sheffield, which is no concern of ours, and Derbyshire Dales and the High Peak, which are, have both got large pots of money to improve cycle ways and non-car schemes and to persuade people out of their motor vehicles and into the fresh air.  As you already know, and as I am finding out, this is a Good Idea.  The Travel and Transport folk are on the campaign trail with ‘Safer Roads, Greener Villages’, focusing on carbon reduction, and they are busy making some big ideas a reality.

The first is about how to make it easier to walk and particularly cycle for short journeys in and around our villages: for example lower speed limits, designated lanes for cyclists and walkers, and safe routes to school. For more information contact Sarah Roberts benlaraid@icloud.com.  Robert Largan, MP for High Peak, joined a HVCA meeting recently and had a lot of positive things to say – this is an area of interest and concern for him – and that sort of support at Parliamentary level is both essential and very welcome.  We can try and get Sarah Dines in on it too and  maybe make a green transport corridor from Castleton to the outskirts of Sheffield.  Dream big.  Then the private vehicles group has got some sensible stuff going on to increase the uptake of electric bikes and vehicles.  One of the mainstays of their enterprise is a car and ebike share scheme.  To get my head round it I am thinking of it as transport hot-desking.  We most of us have a car on the drive and a bike (not necessarily an ebike) in the shed, and they spend most of their time either not being used or being left in carparks.  Applying the coming-down-from-Mars test, what if we got together into little groups and shared them?  You have the ebike on the day you are not taking children to school, and Mrs Pedal down our road will borrow my car until the evening, when neither you nor she will need it but I can take the BBQ round to my sister’s.  George (of Hope Valley Garden Centre and Gigapeak) is taking this to new and unprecedented* heights by putting a solar panel array onto a container and recharging his fleet of vehicles, (which he would love to loan out to you as part of some wheeze or another), by the power of the sun.  Good work, George! Just call him Ra.  The good Sunshine Pizza Oven folk are pioneering this sharing scheme by using this very van to deliver your pizzas.  So it’s already happening out there.

I have – fairly recently – acquired an ebike and after a teething trouble or two, which caused me to go red in the face and scream, I am now zooming round joyfully into Sheffield, Tideswell, etc instead of using my car.  Cracked it.  And I am a woman d’un certain age with no previous record of being fit.  For stories from other ebike users, why they bought one, where they have been on it and why they would never ever part with it now not nohow, see this new website which Roland has put together https://www.shared-e-bikes.com/blog.  It will soon also have on it a short and pertinent guide, written by people who don’t wear lycra when they cycle, to take you through choosing, finding and buying the ebike which is waiting out there with your name on it.

There was a wonderful ebike try-out event in Grindleford recently; despite a postponement due to the weather, and a threatening drizzle, over thirty people turned out and took five varying bikes out for a turn.  They were able to do a circuit of the playing fields to get the hang of their charge before venturing up the hill.  This photo is at the start, by 7.30 pm when the rain finally set in in earnest there were folks zooming around on the grass in ones and twos or flying back into the carpark from their road outing, and everyone looking very happy.  Cries of ‘they are amazing’ could be heard from each quarter.  Each bike was sanitised between use and it seemed to work out really well.  A really successful event.  Grindleford plans to hold another one, with beer and pizza, later in the year or as soon as the rules allow us.  There’s talk of other villages following suit so watch out for notices.

And for more information on the HVCA ventures, including how to join in if you haven’t already, contact Tom Ricketts thespokedwheel@gmail.comarum nobitem voluptatus.

Which segues neatly into trains and buses – John Young from Stagecoach very kindly joined a meeting recently to talk about buses in the Hope Valley.  There are many external factors which make an immediate increase in bus provision problematic but it was so good that he was alive to the possibilities and wanted to work with us.  The very established and successful, in terms of getting more trains on the line, Hope Valley Rail Users Group also met in May and I will find out more about what they are doing for the next blog.  Contact Peter Gait petergait4@gmail.com to find out more.

All of the above is very current.  As time goes by we might also be able to provide some little potted updates about how things came about, and the story of that marvellous evening Jane set up in Hathersage last year, when it all began anew, must definitely be told.  Alumni of that event will know exactly what I mean!  Taking it in turns to breathe and coming out completely inspired and ready to tackle climate change no matter what.