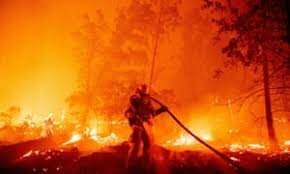 United Nations Chief Warns of a ‘Moment of Truth for People and Planet.

United Nations Secretary General António Guterres said Wednesday that, although the climate crisis is still worsening, he sees a “new world taking shape,” with a shifting mindset, especially among the millions of young people “pushing their elders to do what is right.”

But Guterres said that, right now, the planet is “broken,” and called for an end to humanity’s “suicidal” war on nature.

“This is a moment of truth for people and planet, alike,” he said.

Guterres made the remarks during a state of the planet speech at Columbia University. He was prime minister of Portugal from 1995 to 2002 and served as United Nations High Commissioner for Refugees from 2005 to 2015, before becoming United Nations Secretary General on Jan. 1, 2017.

“Covid and climate have brought us to a threshold. We cannot go back to the old normal of inequality, injustice and heedless dominion over the Earth,” he said.

Although his remarks detailed the stark reality of global warming, including a litany of deadly extremes like floods, heatwaves, wildfires and droughts, the overall message was still hopeful, said Jennifer Tollmann, a Berlin-based climate policy analyst with E3G, a European climate think tank.

“The reason you send out a wakeup call is if you think you can still make it,” she said, referring to the goals of capping global warming and stopping the destruction of nature and biodiversity loss. “He outlined how we make sure this doesn’t turn into one of those post-apocalyptic movies.”