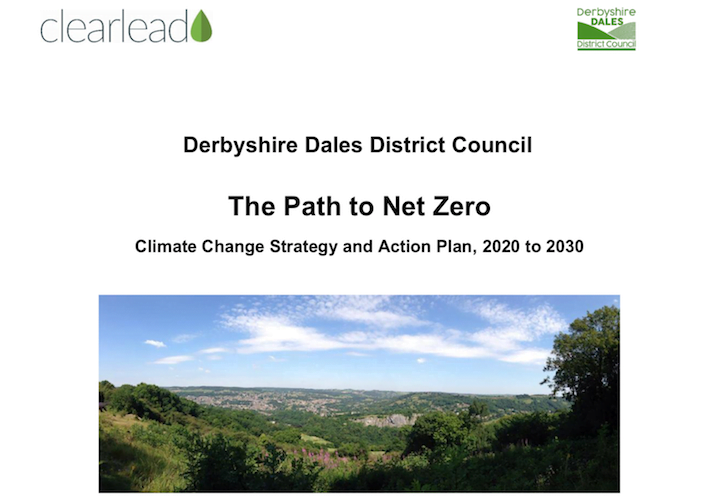 Derbyshire Dales sets out a climate change plan (ahead of High Peak!)

Derbyshire Dales District Council has recently approved and published its “Climate Change Action Plan”.  It is to be found at:
https://www.derbyshiredales.gov.uk/images/2020-10-08_- Climate_Change_Strategy_and_Action_Plan_2020_-_2023.pdf

The plan sets out a path for the Council’s activities to become “carbon neutral by 2030”.  There is much to be welcomed in it, including improvements in energy efficiency, electrification and decarbonization, including of their transport fleet, and investing in low carbon energy generation, predominantly solar photovoltaics.

Having been approved by the Council, the funding necessary to deliver the plan will be built into the capital programme, and a Climate Change Officer will be appointed to support delivery.

Next stages in the Council’s climate change strategy include an increased emphasis on community engagement, to support the objective of reducing carbon emissions across the District as a whole. The Council is also reviewing its Local Plan, and hopefully climate change will be at the centre of this.

One of our HVCA members, Peter O’Brien, is District Councillor for Abney, Eyam, Grindleford and Hathersage, and a member of the Council’s Climate Change Working Group. He is grateful for the support received from HVCA members over the past 18 months, which he says really has made a difference.

But while DDDC (and Peter) should be congratulated for the production of this report, three things should be noted.  First, the report and plan only cover the activities of the Council itself, and moreover does not cover those activities for which the Council is responsible, but which have been outsourced, notably refuse collection and the four leisure centres.  Apparently though there is an intention to address these next.

Secondly, it is not about making the Derbyshire Dales as a whole carbon neutral.  The Council itself is directly responsible for a relatively small proportion of the overall carbon emissions of the area, transport and land use being the biggest contributors.  This will have to be addressed by changes in policy, particularly planning, housing and procurement.

Thirdly, the plan is to achieve ‘net zero’ by 2030.  However this depends on the residual emissions (after the various steps to reduce emissions have been taken) of about 190tCO2e being ‘offset’ by exporting solar generated electricity to the grid.  This, it is claimed, “represents a ‘negative’ (their quote marks) carbon footprint… (which) would therefore effectively ‘offset’ the emissions still generated elsewhere in the Council’s operations.”

Readers can decide whether adding renewable energy generating capacity to the grid actually removes any CO2 from the atmosphere, which is what would be necessary to offset the emissions which it is acknowledged will continue.  And if it does not, then the claim of carbon neutrality, or reaching ‘net zero’ is clearly false.  But the two take away messages for me are that DDDC should be congratulated on making a start, and encouraged to implement the various measures described, but that actually achieving genuine carbon neutrality is going to be a bit more difficult.

High Peak Borough Council, which covers the west end of the Valley, has not yet produced an action plan despite declaring a ‘Climate Emergency’.  Local HPBC councillors Charlotte Farrell and Joanna Collins, along with other councillors, have been pushing the Council to act. To help strengthen their argument, all of you who live in High Peak should write to our Charlotte and Joanna to ask them what action is being taken on the Climate Emergency and on biodiversity. I will do so on behalf of HVCA.